As Eastern Catholics, we celebrate the Divine Liturgy according to the Ruthenian tradition of the Byzantine Rite. This Liturgy consists of - Scripture readings, Eucharistic Prayer, and Holy Communion -- but the ceremonies surrounding them will be different depending on the time of year. The following are some helpful suggestions for in participating in our Liturgy.

Crossing oneself with two fingers brought to the thumb represents the Trinity. The last two fingers held to the palm represent the two natures of Jesus - God and man. Unlike the Latin Rite where where the Sign of the Cross is made from left to right, the Sign of the Cross in Eastern rites is made typically from the right to the left shoulder - to signify Christ enthroned at the right hand of the Father. According to tradition and in the words of Pope Innocent III (1198-1216), The Sign of the Cross is made with three fingers because it is impressed upon us in the name of the Holy Trinity. From the forehead we pass to the breast, then from the right to the left. (Quoted in Gasparri: Catholic Catechism, p. 248). 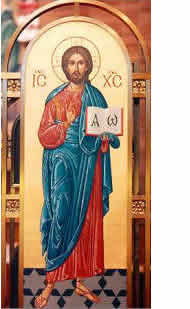 Icons are revelation in pigment and paint. In front of the altar, usually on an iconostasis, which is the screen partition that unites the mystical heavenly (sanctuary or Holy of Holies) to the earthly (nave), you see two icons flanking the altar. The iconostasis can be as simple as two icons flanking the altar (as they do in our church) or very elaborate with many panels. The icon of Mary with the Child Jesus in her arms reminds us of the first coming of Jesus, the God-man. The icon of Jesus by Himself represents His Second Coming at the end of time. The altar beckons us to enter into Gods presence and to put aside all earthly distractions. Icons make us remember: not a passive recollection of a past person or event, but a remembrance that transforms. This is one of the foundation stones of Christian liturgy - that the remembrance makes present the reality.

We use incense as a sign of reverence for the sacred place and the sacredness of the people who are made in Gods image and as a sign of preparing for something important about to happen in the Liturgy. It is our prayer ascending like the smoke of incense before the throne of God.

We bow and make the Sign of the Cross many times during the Liturgy, as a sign of our faith, and the receiving and accepting of Gods blessings. Following the making of the Sign of the Cross, reverence to God is further expressed by bowing the head. We bless ourselves every time we mention the Persons of the Trinity by name, or whenever the priest blesses the congregation. We also bow and sign ourselves whenever we enter or leave the church.

Our altar bread is made with yeast (leavened) to symbolize that Christ is Risen! At the beginning of the Liturgy, the priest will cut a loaf of specially baked prosphora and prepare cubed particles that will be used for distribution of Holy Communion.

This is a barrier that divides the holy altar, in the sanctuary, from the body of the church. The screen has three openings: the royal doors in the centre and two smaller doors called deacon doors. There can be one icon on the screen, or many, but all are hung according to an established order. The royal doors are flanked by the icons of Christ (on the right) and the Mother of God (with Christ) on the viewer's left. It is the Lord as He came in history, and the Lord as He will come again when history is no more. On the far right is the patronal icon of the parish, (in our church it would be the Blessed Virgin Mary), and in the far left is the patron saint of the Byzantine Church, St. Nicholas. If the altar is the highest heaven and the nave the place of transfiguration, the iconostasis is both a window and a mirror. It reveals to us glimpses of the glory of heaven, those transfigured by the divine life.

Above - Picture of iconostasis at 12 Apostles Church, Moscow

The altar is another expression of worship, linked with the offering of sacrifice to God. Leaving the ark, "Noah built an altar to the Lord, and .......  he offered holocausts on the altar." (Gen 8:20)  Sacrifice is a symbolic gesture, present in all religions, which expresses gratitude for the benefits received, submission, invocation, and propitiation.

Is the most sacred place in the Church. It contains the altar on which the Divine Liturgy is celebrated and the oblation is offered. Only those who are entrusted with the sacred ministry can enter the sanctuary to complete the sacred acts. It is to the altar that the gifts are brought at the beginning of the Eucharistic part of the celebration to be offered to the Lord. Then from the altar, the same gifts will solemnly leave the sanctuary to be communicated to the faithful, signifying the raising of the veil which covers the mystery of God, in relation and, especially, in the Incarnation and the Pascal Mystery of the Son.